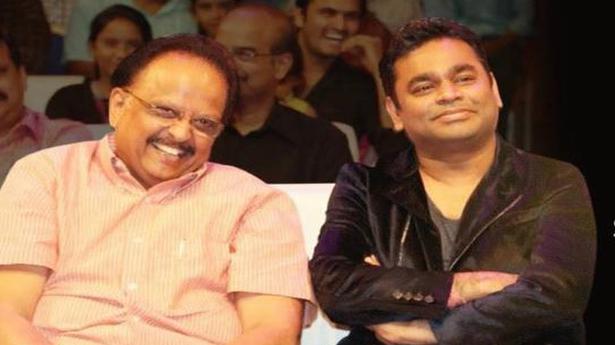 Composer AR Rahman and SP Balasubrahmanyam go a long way, much before the former took the musical world by storm in 1992 with ‘Roja’. Rahman’s association with the late singer started much earlier, in 1982.

“One of the very first performances I did in a big way was celebrating the birthday of SPB in 1982-83 at Music Academy,” Rahman shared in a nostalgic video that he posted on social media, “The compere was Suhasini Mani Ratnam, and I still remember that as being a high in my life.”

Back then, Rahman, then called Dileep, was a keyboard player for other composers. It was at that phase of his life that he first worked with SPB. “SPB would learn a song in 15 minutes, sing it in ten and go for the next recording. I have never seen a singer like that; so quick, professional and humble,” said a nostalgic Rahman.

The composer, of course, would go on to work with him much more closely; SPB sang the melodious ‘Kadhal Rojavae’ in Rahman’s debut album ‘Roja’. “He walked in and asked, ‘How can this studio produce cinematic sound?’ I smiled. He came back after the film released and told me that I had proved that music could be produced anywhere.”

SPB himself has special memories of recording for the track. He told The Hindu, “I’d never seen such a small studio in my life until then. The recording equipment was threadbare and the voice cubicle was small.” ‘Roja’ released to much fanfare and was a superhit.

Subsequently, the two went on to work on several superhit albums, including Gentleman, Kadhalan and Duet, among others. SPB and Rahman have also collaborated for a handful of ‘Rajinikanth introduction’ songs, the most popular among them being ‘Oruvan Oruvan’ from ‘Muthu’. They have also performed in numerous shows together, in India and abroad.

“I remember the amazing lessons I learnt from him. He never said no to anything, was always ready to experiment… be it acting, music direction and singing. He lived a full life, in music, life and kindness, and was loved by everyone. His voice is part of our victories, love, devotion and joy,” Rahman added.

The video was interspersed with performances of SPB on stage with Rahman. “He had a personality for every hero he sang for. I don’t know if any singer would be as versatile like him; he was loved by everyone. We should celebrate his music, his life and his personality.”

“Growing up in south India, SPB is part of our culture, our victories, love, devotion and joy. He’s shared his gift so much with us that we shouldn’t brood; we should celebrate him instead,” the composer concluded.

‘Can we please change this slave name India back to Bharat?’, writes Kangana Ranaut, gets trolled

Eid-ul-Fitr 2021: Crescent moon not sighted in Saudi Arabia, Eid on May 13 in middle-east | Culture News